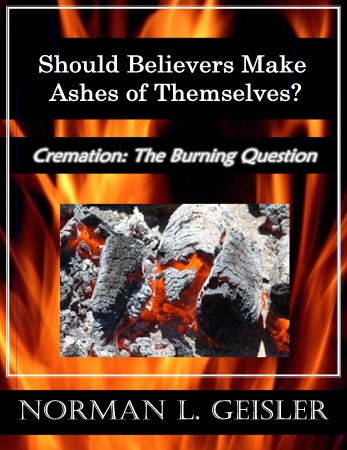 Should Believers Make Ashes of Themselves? Cremation: The Burning Question
by Dr. Norman L. Geisler
2013

This is not available at this time. Bastion Books intends to make it available in 2022 or 2023.

Traditionally Christians, Orthodox Jews, and Muslims have practiced burial and not cremation. But the tide is turning, at least for Christians. Is this good or bad? What does burial symbolize? Is Cremation a Christian symbol?

Cremation is on the Increase in the US
In 1975 the number of US cremations was less than 10%. Today it is over 40%. Within a decade it is projected to be over 50%. Cremation varies from state to state. In some states it rises to 70%, and in others it is only 10%. Likewise, in some countries like Japan the cremation rate is 95%, while in other countries like Poland (largely Catholic) it is only 10%.
Views on cremation vary among religions. Buddhism and Hinduism require it, whereas, the Abrahamic religions (Judaism, Christianity, and Islam) have traditionally disapproved it. It is allowed by many other groups, such as Shinto, Reformed Judaism, Christian Science, Unitarians, Methodists, Episcopalians, and others.
Many arguments, pro and con, have been offered on the topic of cremation. First, we will examine the reasons generally given in favor of it (chap. 2). Then, we will offer a brief response to them by opponents (chap. 3). Following that, we will look at the reasons often offered for burial rather than burning the dead (chap. 4). Finally, we will attempt to answer some tough questions relating to the practice of burial of the dead (chap. 5).

Table of Contents
Chapter 1: What is Cremation?. 5
Chapter 2: Reasons Given in Favor of Cremation. 8
Chapter 3: Responses Given to Arguments for Cremation. 12
Chapter 4: Reasons in Favor of Burial 17
Chapter 5: Answering Tough Questions. 25
Appendix 1: Responding to Alleged Biblical Examples of Cremation. 28